I recently had the pleasure (!) of spending time in the company of someone who turned out to be totally two-faced, which upset me greatly. As I sat in front of my laptop, metaphorically picking at old scabs and feeling betrayed, I flicked through photos I’ve taken of food. In case you haven’t worked it out yet – I love cooking. It makes me happy. Suddenly I started to smile. I may not personally be two-faced (what you see is what you get, much to the annoyance of some people) but my cooking certainly is! There were two distinct voices popping up on my screen. One said “I really can’t be bothered. Throw it in a pot and be done with it” while the other voice crooned “Nothing is too much trouble when creating a meal”. Some dishes used cans and pre-mixed spices. Others were multi-item meals, with everything made from scratch. Some looked like they were thrown together by a total slob, others were prepared to be placed before royalty. Two faces. Two types of delicious food.

It surprises me when people say they don’t have the time to cook veg#n meals, obviously assuming that each one takes a tremendous amount of thought and effort. But in reality it’s so easy to replace meat with non-meat items and basically continue to eat the same way as before. I recently spent a week in my mother-in-law’s kitchen in the UK, where we would co-ordinate our efforts to feed both the omnivores and me with minimal effort. Roast potatoes, roast veggies and lamb for them. The same for me but with the lamb replaced by vegan patties. On another day they had salmon, cooked in the oven. I threw some marinade (it was a thai salad dressing I found in her cupboard) on tofu and cooked it at the same time. One day they had new potatoes, corn, veg stir fry and steak. I had the same with Linda McCartney’s veggie sausages instead of steak. Being vegan took no more effort than eating meat. And it was a lot cheaper. One night I cooked something that I would eat at home, preparing it to feed a crowd when Alan’s sister and family were with us. I used canned chick peas, a pre-mixed curry blend, canned coconut milk and a blob of tomato paste to knock up a chick pea curry. It was served with potatoes fried with spinach and garlic. Very little effort, low cost and a very tasty little (if kinda sloppy looking) meal 🙂

Other quick and easy ideas for dinner include:

This photo below was our dinner on Monday. I arrived back in Canada on Sunday and hadn’t gone shopping. It was rice noodles in vegan stock (using a stock cube) with Chinese picked veggies (from a jar), a tomato I found lurking somewhere and general Tao vegan chicken (from a bag in the freezer). Throw it all in a pan, boil it up and eat.  Hot, filling and delicious, with the bare minimum of effort. 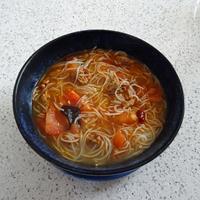 The other face of my vegan cooking takes itself a bit more seriously. Home made tofu. Curries made using multiple packets of spices. A multi-item Ethiopian platter (see last week’s blog for details). When people are coming round for dinner things usually ramp up a notch, especially if they are taste-testing recipes for me. We eat a huge variety of dishes until we can’t eat any more, and then try to fit in a dessert. It takes planning, time and effort, and if we ate this way all the time I think I would go mad. But sometimes its fun to spend time in the kitchen creating a meal. Last night this is what we had:

It took less time than you might think – the tofu took 15 minutes. The rice cooked itself in the rice cooker. I stuck to a small number of veggies and didn’t do any fancy chopping. But it certainly took longer than opening a can of beans 🙂

So the next time someone says “I don’t have the time to be cook veg#n food”, ask them what they think a vegan meal looks like. They might not be aware that vegan meals have two faces!

Whatever you decide to cook this week, enjoy it. Perhaps you could try something new, quick, tasty and healthy. Maybe even something vegan….

One thought on “I’m a Two-Faced Vegan”